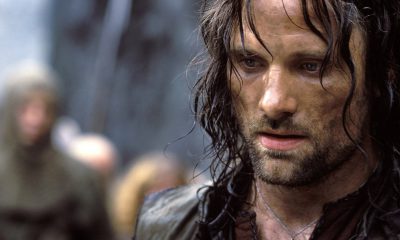 This movie is the second of three which make up The Lord of the Rings. The fellowship has been split. Frodo and Sam continue to Mordor to destroy the One Ring in the fires of Mt. Doom, with Gollum as guide and nemesis. Meanwhile Merry and Pippin are in the hands of the evil Orcs. Aragorn, Legolas and Gimli follow the Orcs’ trail in hopes of rescuing their comrades, and work with the peoples of Rohan to fight their common enemy.

Based on J.R.R. Tolkien’s masterwork, The Lord of the Rings: The Two Towers.

This, the darkest of the three films, sees our heroes struggling against seemingly impossible odds. It is spectacular, moving, beautiful. It is hard to write a brief review about such an epic film that does not trivialize it or repeat what has been said hundreds of times.

Gollum makes his first full appearance through the brilliance and hard work of actor Andy Serkis and the CGI gods at Weta.

The country of Rohan and the Golden Hall of Edoras are spectactular, as is the fortress and battle at Helm’s Deep. Rohan’s King Theoden, Eomer, and Eowyn are excellent additions to the cast of heroes, and Brad Douris makes a delightfully poisonous Grima Wormtongue.

I have heard it said that the battle at Helm’s Deep goes on too long but frankly I did not feel that way. If I have any complaints about this film, it is only in the ways that it deviates from the book, which is best saved for another page on this site.

Oh yes, and Viggo as Aragorn just gets better and better….

As with Fellowship, I recommend the extended version of the DVD for its additional scenes (including the introduction to Brego), commentary and other extras.

Articles about The Two Towers

Several YouTube members have spent a LOT of time creating HD video clips of almost the entire movie. It’s hard to choose from them. My thinking is that the clips are to give new folks a taste of the movies so they’ll want to see them, and to allow crazed fans like myself to relive our favorite moments when we don’t have time to haul out the DVD/Blu-ray and watch the whole thing. So I’ve avoided the really long clips, but have included two The Two Towers trailers and several clips featuring Viggo Mortensen as Aragorn. Next I want to track down some good interviews with Mortensen.

This review by Jerry McCulley at Amazon.com says it much better than I can:
Howard Shore’s music for the massively successful first film chapter of Tolkien’s Ring saga won him the Oscar for Best Original Score, something of a surprise given the music’s ambitious scale and determinedly dark overtones, factors that handily blurred the line between typical film fantasy music and accomplished concert work. Its sequel takes the same, often Wagnerian-scaled dramatic tack, following the film’s story line into even more brooding and ominous dark corners. The previous film’s Hobbit-inspired pastoralism is supplanted here by rich ethnic textures that expand the musical scope of Middle-earth and the World of Men; the Hardanger, a Norwegian fiddle, represents the Rohan and the North African rhaita colors the Mordor theme, while log drums, dilruba, wood xylophone, and cimbalon add intriguing textures elsewhere. The score’s looming orchestral clouds are brightened by Shore’s masterful choral writing, which infuses ancient liturgical influences with various solo turns by Isabel Bayrakdarian, indie-pop star Sheila Chandra, Ben Del Maestro, and Elizabeth Fraser. “Gollum’s Song,” the composer’s concluding collaboration with lyricist Fran Walsh, is delivered with Björkish, postmodern angst by Emiliana Torrini, and helps punctuate the story’s modern sense of allegory.
1. Foundations Of Stone
2. The Taming Of Smeagol
3. The Riders Of Rohan
4. The Passage Of The Marshes
5. The Uruk-hai
6. The King Of The Golden Hall
7. The Black Gate Is Closed
8. Evenstar – featuring Isabel Bayrakdarian
9. The White Rider
10. Treebeard
11. The Leave Taking
12. Helm’s Deep
13. The Forbidden Pool
14. Breath Of Life – featuring Sheila Chandra
15. The Hornburg
16. Forth Eorlingas – featuring Ben Del Maestro
17. Isengard Unleashed – featuring Elizabeth Fraser & Ben Del Maestro
18. Samwise The Brave
19. Gollum’s Song – performed by Emiliana Torrini