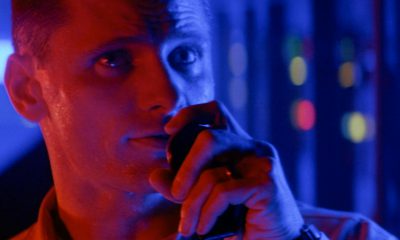 This tense submarine thriller stars Gene Hackman as the veteran captain and Denzel Washington as his well-educated XO. Viggo Mortensen has a strong supporting role as the clean-cut weapons officer, Peter “Weps” Ince.

When a message transmission is cut off, the officers on the USS Alabama must decide whether to launch nuclear missiles or wait for further orders. The Captain and XO reach different conclusions. Mortensen’s Lt. Ince is caught between his trusted commanding officer and an equally trusted good friend, and his decision will influence whether the United States launches a nuclear missile. The tension he feels is reflected more in his face than in his dialogue, and the camera makes good use of Mortensen’s skill.

The film was scored by Hans Zimmer, who won a Grammy Award for the main theme, which makes heavy use of synthesizers in place of traditional orchestral instruments.
1. Mutiny
2. Alabama
3. Little Ducks
4. 1SQ
5. Roll Tide (Includes Hymn “Eternal Father, Strong To Save”)