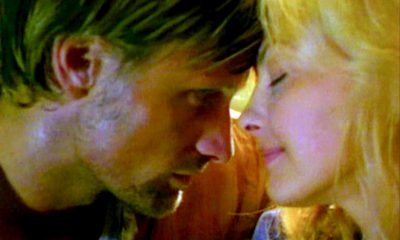 Dark, sensuous drama about an orphaned teenager Darkly Noon (Fraser), from a strictly religious family. Darkly is lost in the woods and ends up in the home of beautiful Callie (Ashley Judd) and deaf-mute Clay (Viggo Mortensen). As Callie nurses him back to health, he becomes obsessed with her and sinks into madness and violence.

The Passion of Darkly Noon is an experimental film with an unexpected story, taking risks, loaded with symbolism, well acted and beautifully shot. If you are looking some something out of the mainstream and have a stomach for violence, you will find it at least interesting. However, it is not an easy film to watch. Darkly Noon’s obsession leads him to behavior that is initially self-destructive, finally exploding into bloody homicidal violence. Viggo fans who are faint of heart or looking for a light cheery evening should look elsewhere or else fast-forward about 3/4 of the way through the film to watch the steamy love scene between Clay and Callie.

Articles about The Passion of Darkly Noon

The Passion of Darkly Noon Trailer