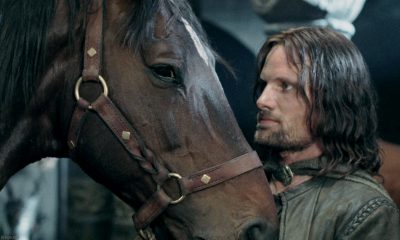 It’s actually a little confusing to talk about “Brego in Lord of the Rings,” since Brego the horse is a character created purely for the films. (Brego was probably named for Brego the Builder, a great king of Rohan.)

In fact, the entire side story described below, about Aragorn’s injury and presumed death while fighting warg-mounted Orcs on the way to Helm’s Deep, is a creation of the screenwriters.

I’m not sure why Peter Jackson decided he needed to add a side story about a horse. Goodness knows he had enough material! But it was enjoyable for those of us who think that most outdoor scenes can be improved with the addition of a horse. I’ve posted several video clips showing the scenes described here, see links at the bottom of this page.

In the exended DVD version of the Two Towers film, but not in the books, Brego is the name of a dark bay horse that belonged to Theoden’s son Théodred. After Théodred’s death, Brego became wild and unmanageable. When Aragorn sees Brego in distress in the stables at Edoras, he speaks to him in Rohirric, calming him, and then says to Éowyn, “Turn this fellow free. He has seen enough of war.”

See Elvish.org for their translation of Aragorn’s words to Brego.

Later, on the march to Helm’s Deep, Aragorn is injured fighting Orcs on wargs, falls off a cliff into a river, and is carried downstream. Brego, evidently wandering the Mark wearing a halter and rope, comes to the wounded Aragorn. (There is a hint that perhaps Arwen telepathically contacted Brego to send him on this mission.) He lies down on the beach next to Aragorn so he can climb onto Brego’s back, and carries him the rest of the way to Helm’s Deep.

As a one-time horse-owner, this later scene has a lot of resonance for me, and some dissonance as well. When I was a child I would go out to the pasture where my pony was lying, and give him carrots and climb on his back. He would then stand up and we would trot off, sans bridle and saddle. If I were to lie in the grass myself he would be almost certain to nuzzle my face the way that Brego did with Aragorn lying on the beach.

The dissonance lies only in the idea that any decent horseman would turn a horse loose on the plains wearing a halter and lead rope, which could easily get hung up in a tree or bush and cause the animal grave injury. But yes I do know this is a movie, and I really did enjoy this scene.

Video Clips of Brego in The Lord of the Rings

The scene in The Two Towers where Brego lies down so that the wounded Aragorn can climb aboard was planned carefully. Though the horse would not have deliberately injured Viggo Mortensen, he could have accidentally hurt the actor when he lay down, especially if he was feeling anxious. The “making of” videos imply that Uraeus (see below), who played Brego in most of the scenes, was the horse who lay down beside Aragorn at the river, but we have read elsewhere that a double named “Brownie” performed this work, so we’re not sure which horse appears in each of these photos. (The fourth photo is a screencap from the film; the others are “behind the scenes.”) 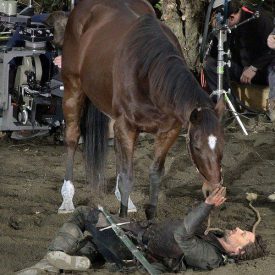 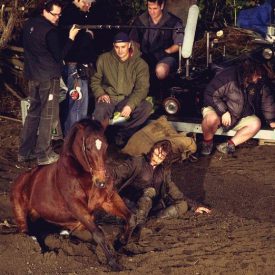 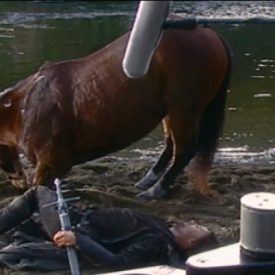 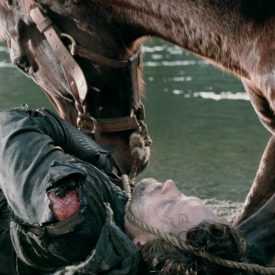 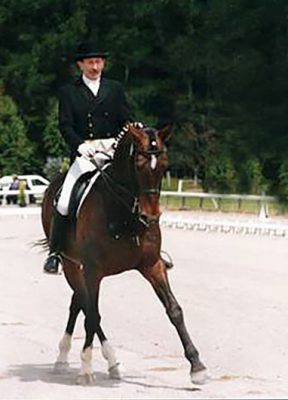 The horse who played Brego in The Two Towers and The Return of the King is a Dutch Warmblood stallion named Uraeus. Uraeus was owned and trained by top international trainer Lockie Richards, and competed successfully in FEI-level dressage before retiring to sire sport horses. (See photo of Uraeus in dressage competition, left.)

Uraeus’ cushy stud career was interrupted by the filming of The Lord of the Rings in his home country of New Zealand. “It all happened in five minutes,” says Lockie. “They rang me and said they wanted a stallion. I told them if they could get him on their truck, they could try him, but that he absolutely won’t go on a trailer and he’s only been on my truck in the past ten years.” Uraeus went on the truck and worked out well despite having never been ridden bareback before. Although actor Viggo Mortensen, who played Aragorn, had ridden since childhood, he took riding lessons to learn to properly handle the highly-trained stallion.

Viggo became attached to Uraeus, and after the movies were finished, he bought him. Although it has been reported (including here on this page) that Uraeus lived on Viggo’s ranch in Idaho, in fact he continued to live in New Zealand at Jane Abbott’s farm with Kenny, the horse who played Hasufel. See this interview for the correction, and thanks to Trilby for pointing it out.

In 2007, it became news when Uraeus required emergency surgery for a severe episode of colic. Thankfully, he recovered well.

Uraeus passed away in May, 2015, at Jane’s farm. Having been born August 1, 1985, he was just a few months shy of his 30th birthday. Viggo Mortensen reported his loss on the Perceval Press website: “A timeless presence in the minds of those who had the honour of knowing this proud, handsome, and supremely intelligent being, mighty Uraeus has finally come to rest on the physical plane. Thank you, Jane and Ray, for helping him do so with dignity. Dearest friend and teacher, I hold you and keep you.”

Side note: notice in the dressage photograph that Uraeus has three white socks: on the right fore and both hind legs. In the movie Brego has socks only in the rear so they evidently blacked out his front sock. I can only guess that either the front sock was distracting in the close-ups next to Viggo’s face, or perhaps they had a double for Brego with rear socks only. 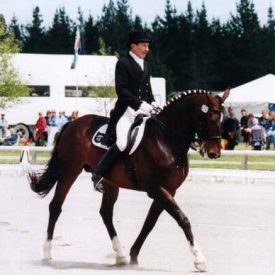 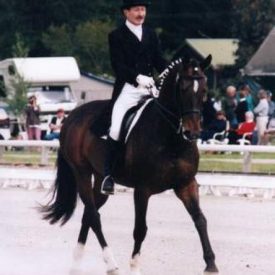 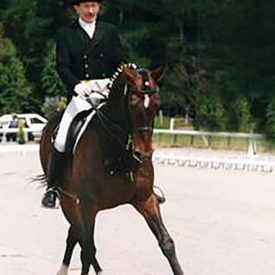 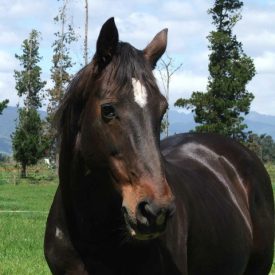