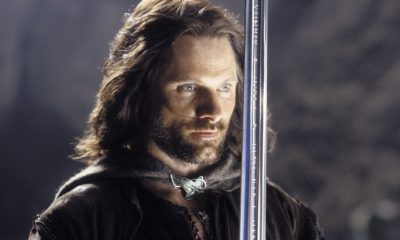 This movie is the final of three which make up The Lord of the Rings. Frodo and Sam continue their journey to Mount Doom to destroy the One Ring, threatened by Gollum, orcs and the nasty Shelob. The other members of the fellowship continue to rally the forces of Rohan and Gondor to fight the final battles for Middle Earth.

Based on J.R.R. Tolkien’s masterwork, The Lord of the Rings: The Return of the King.

Those who were disappointed in the diminishing quality of the Matrix movies will be relieved to find that films of The Lord of the Rings trilogy just keep getting better. Yes it is 3:20 long, I only wish it were longer!

The extended version, released in December, 2004, contains fifty minutes of additional footage, including the resolution of Saruman and Wormtongue, the Mouth of Sauron, the Houses of the Healing, the romance between Faramir and Eowyn, and much more. In addition, there are two discs with over six hours of specials. I particularly enjoyed the additional insights into Tolkien’s life and motivations, and the “Horse Lords” special that delved into the horses, their training and the relationships that developed between the horses and riders. The anecdotes the cast members tell about each other are also a treat.

Articles about The Return of the King

It’s hard to choose from the treasures, but I managed to limit this playlist to the Return of the King trailer, 8 video clips featuring Viggo Mortensen as Aragorn, and one interview with Mortensen. I’ll be adding a few more interviews as I find good ones.

Another deserving Oscar-winning soundtrack for Howard Shore and cohorts:
1. A Storm Is Coming
2. Hope and Memory
3. Minas Tirith – Ben del Maestro
4. The White Tree
5. The Steward of Gondor – Billy Boyd
6. Minas Morgul
7. The Ride of the Rohirrim
8. Twilight and Shadow – Renee Fleming
9. Cirith Ungol
10. Anduril
11. Shelob’s Lair
12. Ash and Smoke
13. The Fields of the Pelennor
14. Hope Fails
15. The Black Gate Opens – James Galway
16. The End of All Things – Renee Fleming
17. The Return of the King – Viggo Mortensen
18. The Grey Havens – James Galway
19. Into the West – Annie Lennox

John Noble: Denethor
Plus the casts from The Fellowship of the Ring
& The Two Towers