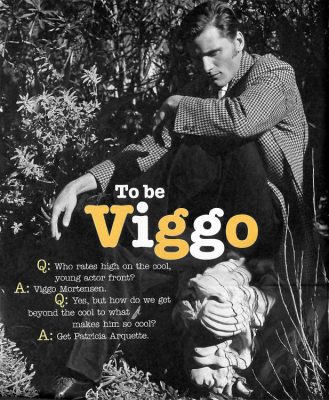 Q: Who rates high on the cool, young actor front?

Q: Yes, but how do we get beyond the cool to what makes him so cool?

A: Get Patricia Arquette.

In Tony Scott’s searing post-Cold War thriller Crimson Tide, Viggo Mortensen gives a superbly taut performance as a nuclear-submarine weapons lieutenant—the only officer who knows the missile code—caught in a power showdown between hawkish captain Gene Hackman and by-the-book commander Denzel Washington. It’s a rare studio role for the Danish New Yorker, who selects his parts with no concern for celeb kudos and has consequently retained the saturnine edge he showed in films like The Reflecting Skin and The Indian Runner. Mortensen gives few interviews, but he agreed to be grilled by our intrepid reporter, Patricia Arquette, his Indian Runner partner and a devoted Scott-ophile who worked with the director on True Romance.

Patricia Arquette: I recorded some things earlier, and Viggo checked the tape recorder, rewound, and erased them. We’ve learned lesson number one. [VM laughs] He’s a control freak in a bad, incredibly thick polyester shirt. O.K., Viggo, my first question for you is this—

VM: You’re welcome. I tried to find a yellow tulip for you, but I didn’t find any that were—

PA: Tulipy enough for me?

PA: Thank you for the effort. [to tape recorder] He’s given me some beautiful roses. If you were a flower, Viggo, what kind would you be?

VM: Today, I’d be one of those spiky little red bottlebrush trees.

PA: A lot of bees always gather round those. O.K., Vig, give me a gardening tip. What do I do if I have snails eating all of my strawberries?

VM: Put little bowls of beer down for them.

PA: What does that do?

VM: They crawl in there and drown. They probably die happy. Beer is better for the environment than pellets.

PA: O.K., say I have three grandmothers coming over for a little after-church picnic, what kind of menu would you suggest?

VM: It depends on who they are.

PA: Let’s see, what are you? Lutheran! All right, Lutheran boy, what kind of a Lutheran meal should I cook for them?

VM: Well, you’ve influenced me a little bit. I don’t eat as much pig as I used to, but that would be my first choice, normally.

PA: Just a pig pork plate, some bacon and ham, some prosciutto, and what else?

PA: I’m going to conduct the rest of this Interview like a prosecutor. Where were you Wednesday at 7:30 p.m.?

VM: I was riding my bike. I got a flat tire.

PA: How many times do you think you’ve fallen asleep with all of your clothes and shoes on this year?

VM: Every night for the past two weeks, for sure. Have you seen my couch?

PA: That sort of Norwegian bobsled?

PA: Now, convince me you love Tony Scott more than I do, because I don’t believe it’s possible.

VM: You said you loved him so I was favorably disposed toward him. It’s not a coincidence that all the fellas look so nice in their snug khaki uniforms in Crimson Tide, because in the rehearsal period, he paid out of pocket for all of us to get liposuction.

PA: [laughs] He did it for us in True Romance.

PA: No. He just said that to make you feel better. So have you seen Crimson Tide?

VM: Only the little bit you get to see when you’re looping. My character is an average person in an extraordinary situation who has to make difficult decisions. It was nice to play a guy with a job and a family, rather than a guy with a big ax to grind. And scary too, because in a role like that you have to fit in, whereas you don’t if you play a sociopath. In this role, I couldn’t hide behind violence or fake teeth.

PA: I learned a lot working with Tony.

VM: If he didn’t wear those pink shorts every day and smoke that cigar, would it make a difference?

PA: I don’t think I could care about him [Laughs] When those pink shorts dissolve, I’m gonna have some made for him and age them so they’re exactly the same.

VM: I think he only has one pair. Over the left cheek, they have a little cigar burn or something that’s probably been there since Top Gun. You should make him about five or six pairs. Tony’s really secure as a man, I think, because he’s never threatened by anyone from the cast and crew suggesting ideas. Was he like that on True Romance?

PA: Right down the line. Sometimes he’d say, “I’m not sure I agree with you on that,” and then we’d shoot it and he’d go, “You know what, hon, you were right. Let’s do it your way.” So here we are in the Snow White Cafe [in Hollywood] gushing like we’re the Tony Scott Fan Club. Now, Mr Mortensen, it was a pleasure to work with you on The Indian Runner.

PA: I don’t want to use any corny words, but you committed yourself to really being there, and you have a lot of fresh, eccentric ideas.

VM: Thank you. You too [mutual applause] What I enjoyed was that some takes would work between us and some wouldn’t, but every once in a while that big moment would just happen. It would be like getting a present.

PA: We were supporting each other and listening to each other. that’s so important. To be an actor is to be emotional on cue, and there’re times when people, for what ever reason, are emotionally unavailable. As much as they’d like to be there, it’s impossible.

VM: I’m a control freak about wanting my characters to be faithful to where I think they’re coming from. But I don’t think I try to control anyone I’m working with. Of course, if I’m playing a character who is controlling, then sometimes…who the fuck knows? There isn’t a set rule, but you can get further if you are open to forgetting everything and having a whole new approach to each job.

PA: So Viggo, I’m twenty-seven now. Give me a little pep talk. What can I expect from this life of mine?

VM: Well you seem happy and you’re doing good work. If I may say so, I find that when I talk to you about acting, you’re really hard on yourself. I understand that, because I am as well. I know that’s part of the reason you always do a great job. I would just like to see you stay as thorough as you always are, but have fun with your characters, and not torment yourself as much. I think you’re better at this than I am, so I shouldn’t even be talking.

VM: I agree. Those moments when you feel you haven’t even gotten from point A to point B can turn out to be the best scenes.

PA: You’ve taught me a lot. I remember I was agonizing over a character once and you said, ‘Look you’re the only person in the world who’s playing her, and nobody knows how she’s supposed to react. You’re the only one who knows, and so whatever you do, you’re right.” That’s a very liberating way of looking at things.

VM: You can’t achieve perfection, obviously, but the goal that I have—which I guess is a goal in life also, and it sounds trite—is to be happy, even if I’m playing a miserable individual.

VM: Interview just wanted us to talk for five minutes.

PA: Yea but they’re gonna get an earful whether they like it or not.

PA: Sometimes it breaks your heart—but, you know, that’s life.

Scans from the Article 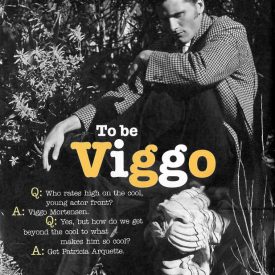 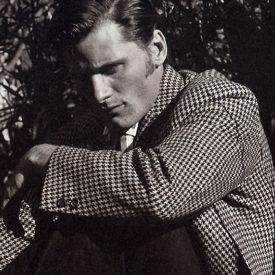 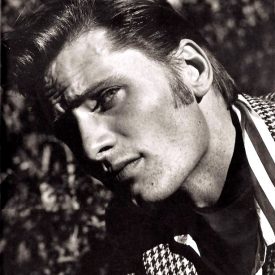 Notes: Photos by Bruce Weber. Copied from the House of Telcontar archives.