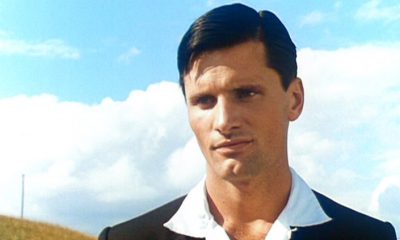 Eight year-old Seth Dove (Jeremy Cooper) lives in an isolated American prairie community in the 1950s. He fantasizes that Dolphin Blue, a neighboring widow (Lindsay Duncan), is actually a vampire, responsible for a number of disappearances in the area.

After a death in the family, the boy’s older brother Cameron (Viggo Mortensen) returns from military service to help. He and Dolphin begin a romance. Cameron begins to suffer from symptoms of radiation sickness, which Seth blames on the widow. His actions have tragic consequences.

The film is not well-known, but received critical acclaim at Cannes in 1990 and has excellent reviews. Unavailable for many years, it was released on Blu-ray and DVD in 2016.

Trailers for The Reflecting Skin, plus interviews with Viggo Mortensen and director Philip Ridley.