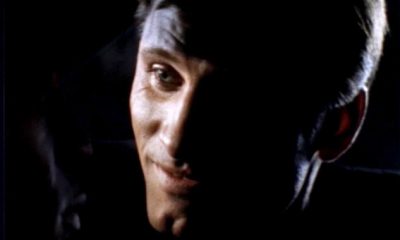 Los Angeles police detective John Harris (Harvey Keitel) comes to London to assist Scotland Yard in tracking down a new villain in the underworld. He discovers the mastermind to be an old adversary, Carl Frazer (Viggo Mortensen). Frazer has been recruiting teenage street kids to do his dirty work.

Viggo Mortensen’s character, Carl Frazer, is about as evil as they come. He is a charismatic sociopath, an expert manipulator of the teenage boys that he recuits for drug deals and assassinations. He woos the seemingly unloved and neglected boys, and appears to genuinely like them, yet he has no qualms about ordering their execution when their cover has been compromised.

He plies the boys with alcohol, drugs and prostitutes. His smooth seduction of a potential new recruit, Christian O’Neill (Craig Kelly), is chilling, and it comes as no surprise when Frazer meets a violent end in the film.

Viggo Mortensen plays the role well, as always. One could argue that his character shows little depth, but given Frazer’s soulless nature, this is probably an accurate portrayal.