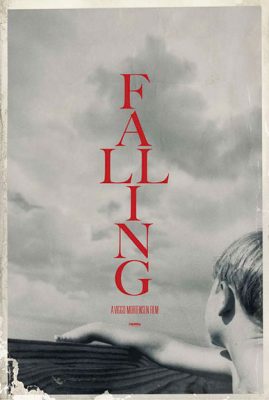 The idea for FALLING came to me as I was flying across the Atlantic after my mother’s funeral. I couldn’t sleep; my mind was flooded with echoes and images of her and our family at different stages of our shared lives. Feeling a need to describe them, I began to write down down a series of incidents and snippets of dialogue I recalled from my childhood. The more I wrote about my mother, the more I thought of my father.

He goes on to describe elements of his relationship with his father and incidents that informed the screenplay.

The film’s synopsis includes this description:

John [Viggo] joins the Air Force and eventually settles down in Los Angeles with his partner Eric, where they adopt a little girl named Monica. The contrasts between John’s modern, urban family and [his father] Willis’ far more traditional lifestyle and nuclear family model are frequently extreme – and often a source of conflict and frustration for both of them. The dynamic of their relationship is driven by generational and geographical divides between a conservative, aging farmer and what he views as his wayward, morally weak son. It is also a contrast between rural, heartland USA and West Coast urban progressive society. In the end, the damaged bonds of familial affection that once united them, and which the story visits through their differing subjective recollections, largely overcome the pain they have caused themselves and each other in the decades since John’s childhood. FALLING is, finally, a story about acceptance and forgiveness.

The statement also sets goals for cinematography and soundtrack, and introduces Lance Henriksen and Sverrir Gudnason, who play Willis and his younger self, respectively.