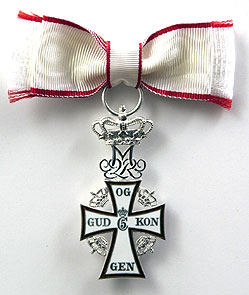 From Frederik at TheOneRing.net, we learned that as part of Queen Margrethe II’s 70th birthday celebration, Viggo Mortensen was one of several notables who were named Ridder af Dannebrog, which translates to “Knight of the Danish banner.” (Viggo’s father was Danish.)

Thanks to Viggo-Works for pointing us to this article about the occasion (in Danish), and to the photograph of the medal.