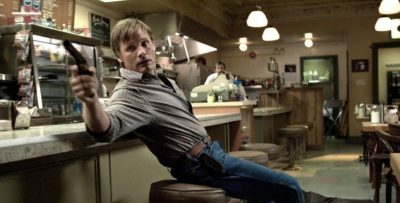 Truthdig caught my attention with a shot of Viggo Mortensen in A History of Violence. They were referring to Wendy Cohen’s post on the TakePart blog.

The Supreme Court opened fire on gun control laws declaring that a sweeping ban on handguns in the nation’s capital violated the Second Amendment right to bear arms. In a 5-4 ruling, this landmark decision states that the Constitution protects an individual’s right to have a gun.

Wow. Is it just me or does this seem like an awful idea? Here are 10 films that make a strong case for gun control.

She goes on to list A History of Violence, in which “a mild-mannered man becomes a local hero through an act of violence, which sets off repercussions that will shake his family to its very core,” and nine other films to illustrate the point: using a gun to solve a problem may just create more problems than it solves.