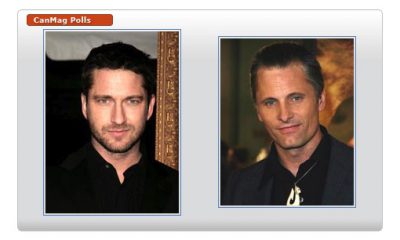 After naming Viggo Mortensen as their readers’ Favorite Actor or Actress, CanMag got some pushback from fans of Gerard Butler, who came in a close second. So they are having a run-off election. Here’s your chance to vote for your favorite. Right now Viggo is slightly ahead with 52% of the 585,943 votes cast.