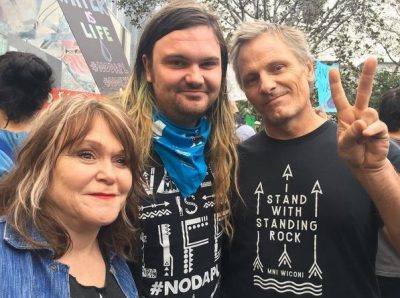 Now, ND voters can’t use the voter ID they used in the primary because it doesn’t include their now-needed current residential address. Native Americans are disproportionately affected because a majority lack residential street addresses on account of their homes on the Reservation having P.O. Boxes instead of addresses, by no fault of their own.

“This law clearly discriminates against Native Americans in North Dakota. Our voices should be heard and they should be heard fairly at the polls just like all other Americans,” says Chairman Mike Faith.

You can help get voters the IDs that they need before the election by donating to the Standing Rock GoFundMe campaign.

What’s this got to do with Viggo Mortensen? We believe he would support this effort, and he’s stood with Pine Ridge and Standing Rock reservations in the past. (See Viggo above with Exene Cervenka and their son Henry Mortensen, supporting the Standing Rock tribe in their fight for clean water.) But just to be clear, we haven’t heard him make a statement about the voter suppression in North Dakota. So this post is written by the Brego.net webmaster, and should not be read as speaking for Viggo Mortensen.