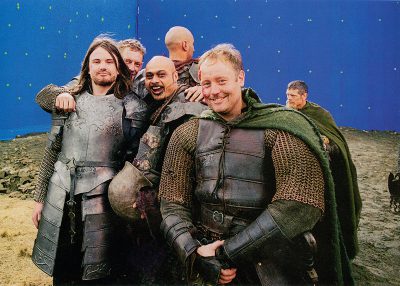 Don’t miss the November 2004 issue of Premiere magazine with Tom Hanks on the cover; it has a gallery of Viggo’s behind-the-scenes photos from Lord of the Rings, plus a note from him and some fun anecdotes from the filming. You’ll find scans here at Brego.net.

Caption for this photograph by Viggo Mortensen (right): “Some members of our legendary stunt team, including a Gondorian guest appearance by Henry Mortensen (far left), during the last reshoot.”