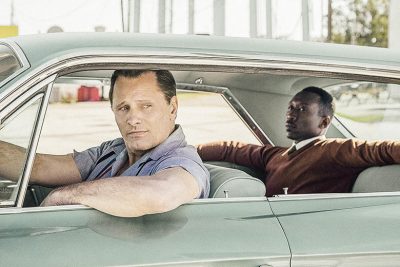 Is there a cinematic subgenre more immediately suspect than the race-themed feel-good movie? Films like The Blind Side and The Help—and before those, a too-long list of Oscar winners, from Guess Who’s Coming to Dinner to Driving Miss Daisy—make clear that the audience members meant to be satisfied by these tidy tales, with their white perspectives and white priorities, generally aren’t viewers of color. Even Hidden Figures, which greatly improved upon the subgenre by actually placing black women at the center of their story, shoehorned a (fictional) white savior into its already inspirational retelling of history.

Set in 1962, the new road-trip dramedy Green Book arrives, then, with a lot of baggage weighing down its trunk, even if this time around it’s the driver who’s white. In an early scene, we see Viggo Mortensen’s Tony Lip, an Italian American schmo between jobs, toss out a pair of his own tumblers after they were used by the two black maintenance workers fixing his sink. By the end of the movie, it’s preordained that he’ll befriend Donald Shirley (Mahershala Ali), the black jazz pianist that he’ll drive from New York to Alabama and back on an eight-week tour. Based on real events and co-written by Lip’s son, Nick Vallelonga, with Brian Hayes Currie and director Peter Farrelly (of the Farrelly brothers), Green Book focuses on Tony’s journey to overcome his ignorance, despite the fact that any aspect of Shirley’s life would’ve made for a far more fascinating film. Instead, we’re stuck watching a white man make his first black friend.

Named after the travel guide listing hotels and restaurants where black people were welcome, Green Book is perfectly adequate for what it is: middlebrow Oscar bait that plays it as safe as can be. Mortensen hams it up in a role written so broadly that his character could be mistaken for mortadella that gained sentience. But Ali, done up with Igor Stravinsky’s stern glasses and spindly mustache, is majestic, with a genteel starchiness that soon reveals tragic layers. The verbal sparring between them crackles, never more so than in their first drive together, as the two alpha males—one violent and proudly uncouth, the other an iron fist encased in velvet—battle for dominance. With a warm, handsome look and winking callbacks galore, the film sometimes feels like a friendly bear hug, followed by several hearty pats on the back.

Any aspect of Shirley’s life would’ve made for a far more fascinating film. Instead, we’re stuck watching a white man make his first black friend.

Its charms are not insignificant, even in a questionable scene in which Tony teaches Donald, who grew up in Russia as a conservatory student, how to eat fried chicken. With his fast wits and faster fists, Tony saves the alcoholic Donald from several scrapes, including a few involving the police. (There comes, however, one plight only someone as connected to high society as Donald can rescue them from.) In turn, Donald treats Tony not just as his Miss Daisy, to whom he must teach greater tolerance, but as his personal Eliza Doolittle, teaching his driver proper comportment and how to write swoon-worthy love letters to his wife (Linda Cardellini, making the most of a nothing role). While Donald bemoans the nomadic lifestyle of the touring musician, comparing himself to a carnival worker, Tony, who thought “the South” meant Atlantic City, has his eyes opened to the beauty, and the beastliness, of his country. Even secondhand racism is insulting enough for him. For Tony, Donald’s straight back, polite smiles, and impeccable manners become both commendable and infuriating.

That’s fine—or it would be if the glimpses we got of this multilingual piano prodigy with no one to talk to weren’t so tantalizing. We get much too little about Donald’s feelings about performing at mansions, including former plantations, filled with white people who worship his talents yet treat him as beneath them. (He resents them, of course, but then why did he opt for a pay cut to undergo this series of humiliations?) We’re also cheated out of learning about his relationships to other black people, other than the obvious complaint that he’s thought of as “not black enough.” His alcohol dependence is rendered solely into plot fuel. We’re too often forced to look at Donald through Tony’s eyes, rather than learn more about him on our own.

Sparked by Ali and Mortensen’s chemistry, the odd-couple dynamic is winsome if familiar, but racism isn’t just about these kinds of interpersonal relationships. It’s also about institutional power imbalances. That reality chips away at the movie’s lunkhead appeal, particularly given its initial setting in the postwar Bronx, where white flight and cold-hearted city planning would soon leave the borough’s south end a haven for crime and poverty. Friendships between people of different races can bring more joy to the world, but they alone won’t put an end to racism. You can certainly enjoy this heartwarming tale about Tony and Donald as an isolated event, even if it centers on a prejudiced white man granting humanity to an exceptional black man who, by his own admission, shares little in common with his fellow black Americans. But there’s something unseemly about singling out this story, about the seemingly narrow scope of racism and how easily it can be undone. Green Book decries those cultural pockets designed to make white people feel good, often at people of color’s expense. But that’s about all it does, too.