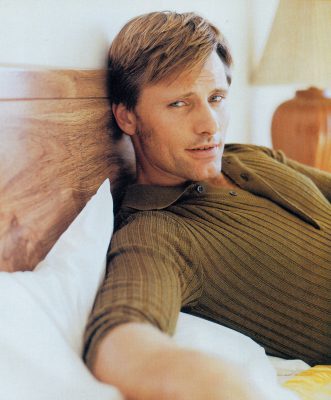 It seems ironic that Viggo Mortensen, virtuoso bad boy, wants to meet at the Snow White Coffee Shop, and now sits beneath a looming portrait of Prince Charming. You know him from his turn as the wired, paraplegic ex-con in Carlito’s Way—he tries to rat on Al Pacino. He abandons his wife in the throes of labor in Sean Penn’s Indian Runner, only to bash in Dennis Hopper’s head in a bar, and in Daylight, his wannabe hero disastrously attempts to one-up Sylvester Stallone’s rescue effort. In The Prophecy, Mortensen rips out Christopher Walken’s heart and snacks on it as, yes, Lucifer. This what you know. So when he pulls back your chair, apologizes for the rain, and hands you a book of his poetry called Ten Last Night, it comes as something as a surprise. That he knows to do this. That he writes poetry. That it is good. That he is, really, a gentleman.

The Portrait of a Lady director Jane Campion says he was shy at first. “Nicole [Kidman] and I had to practically beat him up. We called him Kiddie just to try and get him to treat us like pals. Of course, eventually we warmed him up so much we couldn’t control him.” In Portrait, Mortensen plays Caspar Goodwood, one of Nicole Kidman’s intrepid, long-suffering suitors. “Caspar is insistent, he basically says, ‘I love you and I am willing to wait as long as it takes,'” Mortensen says. “I admire that.” But how would such zealously romantic notions play to a roomful of the tattooed tough guys Mortensen has played in the past? Wouldn’t they think a guy who follows a woman around Europe declaring his undying love somewhat pathetic? Mortensen shrugs. “How can a man be pathetic who really loves someone?”

Mortensen will next be seen pounding Demi Moore into shape as a command master chief training the first female Navy SEAL candidate in Ridley Scott’s tentatively titled In Pursuit of Honor. Though Mortensen spent months researching the role, he did not work out with Moore—who, he says, is “tough as nails”—before the cameras started to role. “It’s kind of a lonely job,” Mortensen says of the chief. “The guy’s the leader, there’s a distance and an isolation he has to have. I had to start off at a certain level to feel like I could lord it over them.” Surprisingly, Mortensen sees some parallels between the 19th-century romantic he plays in Portrait and the hardcase master chief in Honor. “I think they’re both gentlemen. By the end you get that—the chief has a real old-fashioned code of ethics.”

In Portrait, while John Malkovich and other characters joust with words and shatter each other with glances, Mortensen gets to wield the ultimate weapon: the raw, raging physicality of a simple kiss. Does he like kissing? “I guess the simple answer is yes.” As Mortensen explains it, “Kissing and the lack of kissing” are crucial in illustrating the theme of the movie. Why? He smiles like the devil he once was. His reply is cryptic. “Sometimes it’s nice to wait.” 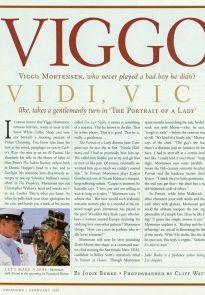 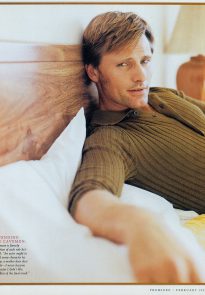