In Peter Farrelly’s Green Book, Viggo Mortensen plays Anthony Vallelonga, better known as Tony Lip, a tough New York City bouncer (with a yuge New York City accent) who is looking for work. Tony takes a meeting with Dr. Don Shirley (Mahershala Ali), a classically trained pianist who is touring the segregated South of 1962 for the first time and is looking to hire some streetwise muscle as his driver. More than anything, what makes Green Bookwork – a movie about the horrors of racism, yet still maintains a “feel good” aura – is the chemistry between Mortensen and Ali. If those two aren’t on the same page, fuggedaboutit (sorry).

Ahead, we spoke to Viggo Mortensen about why he didn’t even want to play this role at first (mostly because he’s not of Italian descent), why he gets along so well with his co-star, Mahershala Ali, and why he thinks Green Book is the best screenplay of 2018. Also, on the day this interview took place, it was the day before the midterm elections, and Mortensen made sure I was voting.

This is one of those kind of movies where you walk out feeling good, which is a rare feeling these days.

I’ve heard that a lot and I’ve done a lot of screenings with audiences where we answer questions afterwards and they’re really passionate everywhere. We’ve been traveling a lot with it, England and places where they warned us, “Well, it won’t be like Toronto. It won’t be like New York. The audiences here are a little more subdued.” And they were on their feet and cheering and clapping and laughing and crying. It was crazy! It’s been really great that people feel better, basically, after the movie than when they went in the movie theater. That’s a great thing that they’re more hopeful, in some way, and in the times we’re living where people are arguing so much. It’s great to have a movie that brings people together like that.

To be clear, there are some tough scenes in this movie.

Well, yeah, there are some ugly things that happen in Green Book. I mean, I saw that in the script when I first read it. I said, “Wow, this is amazing.” It’s very hard to tell a story that makes you laugh out loud, that moves you, that might make you cry, and that leaves you with something to think about. Something profound when you walk out. To balance all of those things: to entertain, make you think about stuff, serious stuff, race and people, differences in education, all kinds of stuff and culture, but without preaching. It’s not a movie, it’s like a movie that invites you to feel and think. But it doesn’t tell you to do that. It doesn’t divide. It doesn’t preach. It’s not a movie made for just one part of society. It’s the kind of story that you could take anybody to I think.

I do wonder, what were you thinking when this movie came you and it’s a movie about race relations in the South directed by Peter Farrelly?

I think that’s what happened when people saw it in Toronto where the world first saw the movie at the film festival. I guess they probably had some preconceived ideas about it. Wow, it’s a Pete Farrelly movie! It’s going to be kind of slapstick or something! Let’s see. Yeah, it is funny at times, but it’s a different kind of funny. It’s an organic funny. It’s about the contrast between these two guys. You know, this very cultured black musician who speaks a bunch of languages and has doctorates, and a guy who has a sixth-grade education and, as Pete likes to say, didn’t pay much attention after third grade.

That’s why it’s funny, but it’s also incredibly moving and thought-provoking. I think people were just blown away that Pete Farrelly could do this. I guess they didn’t expect it. And I think, maybe, it’s going to be like that for audiences. They’re going to be pleasantly surprised. I’d rather someone go in and hear that it’s good and then feel it’s really good rather than you hear something’s good and you go and then you say, “Eh, it’s okay. It was good.” I think in this case I think people are just going to feel like the movie gets stronger as it goes along.

[The sounds of sirens come blasting over the phone from Mortensen’s end.]

Do you hear that?

Why are there sirens? Where are you at?

I’m in a hotel room in Los Angeles. I don’t know what that was, but they weren’t coming to get me. Not yet. They couldn’t find my room.

Don’t let them get you.

No, no, no. Not until we finish our interview. By the way, are you voting tomorrow?

Or did you already vote?

They don’t allow that in New York.

Are you going to vote twice?

Okay, well I hope you vote at least once. You know, if you don’t vote, you have no room to complain later about how the country is being run. Who’s your Congressperson? 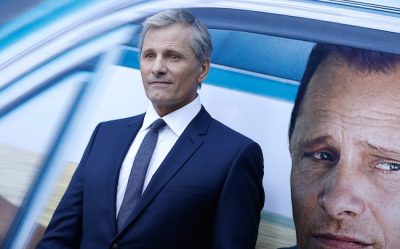 It’s crazy that Tony Lip is Carmine from The Sopranos.

Right? Yeah, I mean, fortunately, he did do some stuff, especially that part, so I could look at him, but that’s much later than when this happens. He was a younger man. When Pete proposed this to me, to be honest with you, I read the script and I said, “Wow, this is tremendous.“ I said to him, “It’s a great story. I think for your first drama, this is a great choice and I’m sure you’ll knock it out of the park but I think you’re handicapping yourself by having me play this guy.” He goes, “Why? You did Eastern Promises, you did this, you did that.” I said, “Yeah, but I’m not Italian-American. There’s a lot of good Italian-American actors out there.” He said, “But I know you can do it. I just want to do something different with each of these roles.” And he did. He cast me and then cast half the Vallelonga family, the family in the movie.

There are a lot of non-actors which is, again, he’s taking more of a chance. He’s obviously a gambler to do this. But I was a little nervous about it. I didn’t want to do a caricature. I wanted to get it right and I got a lot of help from Nick Vallelonga and his family. I ate some meals with them. I spent a lot of time with them. They shared all kinds of stories about Tony Vallelonga and pictures and recordings of his voice. I could watch some of the stuff he did on TV and some bit parts in movies.

Had you met Mahershala Ali before this?

I had. Fortunately, I had met him in 2016 when he won during that awards season. He won for Moonlight. He won a best supporting actor Oscar and he was nominated for everything.

And you were up for Captain Fantastic at that time.

Exactly. So I was at all those events and one of the events was like a brunch thing. I think it was an Independent Spirit Awards, like the brunch for the people who had been nominated, just to get together and meet each other shortly before that ceremony. You know, those kind of things, like meet and greet and you talk for 30 seconds with each person. It’s not very profound conversations. It’s just not the kind of thing that happens there, right? You’re just meeting people, saying hi and congratulations, whatever. All the sudden, I find myself in the corner. I was with my son, he came with me. And all the sudden, I run into Mahershala and I said, “Oh, man. You’re incredible. I loved your work in so many things, House of Cards and the stuff you’ve done in the movies, obviously Moonlight was great.” Then he talked about stuff he’d seen of mine and it was like we were just talking about that. Then he said, “Who’s this?” I said, “This is my son, Henry.” We were talking about family and he said he had a baby on the way, which actually I think the baby was born days after that. It went on probably at least a half an hour. We had a regular human conversation.

At those things these are rare.

I think we were both relieved to be stuck in the corner there together. Not stuck, but we’d escaped the hobnobbing a little bit and it was really nice. So then when I did agree to do the part, my first question to Pete was, “Well, who’s playing Don Shirley?” You know, who’s going to be my dancing partner in most of the movie?

Because if that doesn’t work, the whole movie is off.

Right. When you think about it, so much happens in the car. That could be really deadly boring if it doesn’t work.

And he said, “Well, I’m hoping it’s going to be Mahershala Ali. That’s who I’d really like.” I said, “Oh, he’d be great and you’re going to like meeting him because he’s obviously a great actor, but he’s also a really nice guy and he’s got a good sense of humor. He’s a total gentleman.” Fortunately, that worked out so I had the advantage that we’d known each other a little. And then Pete and he and I worked on the script and fine-tuned it a little bit as far as just everybody feeling comfortable. It was a great experience. We were really a good team.

When you’re watching this with a crowd, when do you feel like they are won over?

I mean, even the setup where you get to know the Villalonga family really well, and then all the sudden you meet this austere, unusual, almost like a prince. Mahershala’s character. That interview, which goes really badly obviously. That meeting, it starts to work. I think it’s like as soon as we hit the road, things just start to happen. You just start to see that these guys are oil and water. It’s just such good writing. It made it a lot easier for us. Plus the fact that we got along and we were rooting for each other, it just made it fun, you know? It’s one of the best original screenplays out there I think, if not the best. I’d love to see Pete up there with Nick Villalonga and Brian Currie.