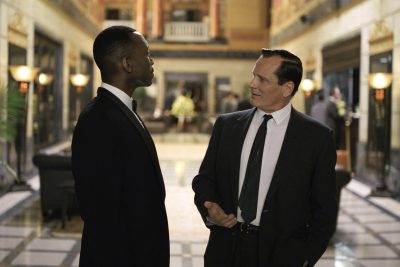 As a Bronx security man who agrees to drive a black musician (Mahershala Ali) through the Deep South circa 1962, he has by far the showiest role in Peter Farrelly’s winning dramedy, and it might finally earn him the Oscar he’s long deserved. The movie wouldn’t work, though, without the elegant, understated balance of his counterpart.

Ali’s Dr. Don Shirley is a brilliant piano maestro, celebrated in the world’s finest private homes and concert halls — he’s performed twice for the sitting president and lives in a lavish apartment above Carnegie Hall — but he hasn’t ever taken his show below the Mason-Dixon. He also doesn’t quite know what to do with a man like Tony, with his bearish habits and blunt-force personality.

Green Book is inspired by a true story, and the script — written by Farrelly, Brian Currie, and Vallelonga’s real-life son Nick — hits many of the beats you’d expect. The bigotry the pair encounters ranges from politely insidious to outright savage; the odd-couple bonding happens inevitably, in picturesque fits and starts.

But it’s hard to overstate how charming it all is, and how much both actors make the material shine. (Linda Cardellini is great, too, in a small but pivotal role as Tony’s wife.) In a world that seems to get uglier every day, this movie’s gentle heart and mere humanity feel like a salve. B+