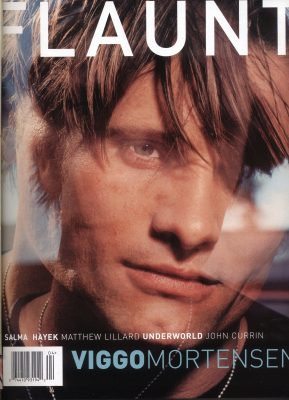 Late last year, Dennis Hopper, Viggo Mortensen, and cinematographer Chris Doyle shared a dais at the Track 16 gallery in Santa Monica, California. Their purpose: to address questions from the audience relating to the gallery’s dual installations of photography and painting by Doyle and Mortensen, with Hopper acting as moderator.

It didn’t take long to fall apart. Hopper read from Rilke, to stage whispers from Doyle. Then Mortensen attempted to recite a 1072 A.D. Chinese poem, “Viewing Peonies at the Temple of Good Fortune,” as Doyle, in high spirits, acted out. The evening quickly mutated into something else: The Three Stooges, choreographed by Marcel Duchamp. No one could get a word in edgewise.

We decided to give Hopper and Mortensen a chance to even the score.

“So, do you know any of your poems by heart?”

“I know a few actually… I know the one I wrote on that rug.” (There is a rug on the floor.)

After years of merging
and allowing yourself
to be assimilated,
your hair and clothes
have turned brown.
Then, one afternoon
you exit a theatre
after taking in
the restored version
of The Hero Returns
and find yourself
wanting to be treated
special.

“This is about Lee Harvey Oswald?”

“Ahhhh, well… who knows where ideas come from?”

“I was hoping we wouldn’t have to do readings or quote Shakespeare, Dennis…”

“… it always sounds like you’ve gone home and memorized a bunch of aphorisms. Or memorized your own poetry…”

“I’ve been around farms a bit. My father’s family is all farmers—pig farmers.”

“I was relating to your tactile work as an artist—there are pigs being slaughtered and so on. Does this come from being around the family farm?”

“That was something I saw on the side of the road. Later, when I wasn’t a kid, I was attracted to it, maybe for those reasons.”

“They were butchering a hog by the side of the road?”

“Yeah, it was sort of a homemade operation. They were dressing this animal, and I asked if I could take pictures, which they were initially reluctant about. They thought I was some kind of animal rights guy or something. I assured them I was just taking pictures for my own interest.”

“I just use what’s handy when I’m making my work, Dennis.”

“Rilke said that poets should avoid love poems because everybody’s already written one better than they’re ever gonna come up with. He said you should deal with daily events and try to bring poetry forth from your life. There’s a great line by T.S. Eliot from ‘The Love Song of J. Alfred Prufrock’—’I measured out my life in coffee spoons…’ That always struck me as someone dealing with everyday life.”

“Or that song by Otis Redding, ‘Cigarettes and Coffee.’ You can get away with a lie sometimes, but it won’t hold up for a second glance or a second reading unless there’s some element of truth, unless you reveal something about yourself. If you set out to write about love, it usually comes out pretty mawkish, but sometimes I’ll be writing something else and it’ll turn into that. What did Rilke say again about writing love poems?”

“What I find with poetry or painting or even acting is that mistakes can often be helpful. In the brief time I’ve been making paintings, I’ve ruined a lot of them by not knowing when to stop. But you just put it aside, and later when you come back to it maybe you remove one thing, or add something else, and all of a sudden it works, where before you were ready to burn it. Or maybe you look at it and realize it doesn’t need anything at all.”

“You’ve got to take that chance, Viggo, or everything is preconceived and there’s never any chance of doing something new.”

“A lot of people make poetry or paintings or movies that way and it works. They make money and can even move people. It’s not necessarily wrong, but I prefer to take the risk of fucking it up.”

“It’s not necessarily wrong, but the person who takes a chance ends up… ”

“And the possibility of doing something new. I really believe that 98 percent of creation is accident, one percent is intellect, and one percent is logic. You have to make the accidents work for you.”

“If you can’t surprise yourself, how are you going to surprise anyone else?”

“Will someone answer the phone?”

“Let’s talk about film for awhile. What was your first film? How did you get started?”

“The first few movies I was in, the ones where I actually had lines, I was cut out.”

“Which movies were those?”

“My first five. I had a part in that Woody Allen movie Purple Rose of Cairo while I was living in New York. It was a fun, improvised thing, but he shoots a lot of stuff and doesn’t always use it. Then, when I first came to Hollywood, I did a scene in a Jonathan Demme film with Goldie Hawn. I played this young Navy guy on leave during World War II who hits on her in a movie theatre. They cut me out and reshot it with her watching the movie alone.”

“And what got you into acting class?”

“I was living in Denmark, and I followed a girlfriend to New York. I saw an ad in the paper for the Actor’s Repertory Company, so I made an appointment for an audition. I prepared something by Isak Dinesen, a monologue by this character who may or may not be Jack the Ripper. I did that, and this poem I’d memorized, thinking I was reading for a play. Afterward they thanked me and told me to come back every Wednesday. I’d enrolled in a class.”

“Had you played the lead in a movie before you did Indian Runner with Sean Penn?”

“I did the lead in a horror movie called Prison. It was Renny Harlin’s first movie in America. Sean saw me in a movie called Fresh Horses directed by David Anspaugh. I played a hillbilly. He sent me a script, we had dinner, and he basically handed me the part. (Hopper lights a cigar.) That reminds me of my grandfather.”

“I remind you of your grandfather?”

“You don’t look like him, but he always had a cigar stub in his mouth. He’s the one that had the pig farm in Denmark. Every inch of the house, the curtains, everyone’s clothing, it all smelled like cigars. Every spring my grandmother would clean the whole house, but the smell was always there.”

“My grandfather was great. He and my grandmother had a farm in Kansas, and I had a big sow as my pet.”

“What was her name?”

“But you had a good relationship?”

“Oh, yeah. I was so weird: I had this big Pepsi Cola bottle with a big rubber nipple on it, and I drank from that until I was about five years old. I’d be nursing on this Pepsi bottle, and watching this big sow feeding all her kids. So when I saw those pigs in your show, it struck a chord.”

“That explains a lot, Dennis.”

“I don’t know if it occurred to you at the time, Viggo, but to be a kid living in Denmark and Argentina, that’s a very exotic childhood.”

“Where does he live now?”

“That’s the ironic thing: My parents split up when I was 11, and he lived in different places, wherever he had a job. Then some years ago with his third wife he ended up buying a farm in upstate New York, near the Canadian border, about 15 minutes away from my mother. The landscape and climate is not much different than what you’d find in Denmark. So after all that traveling, trying to be anything but a Danish farmer, he ended up being a Danish farmer in New York.”

“Now there’s a title for an Adam Sandler movie: A Danish Farmer in New York.”

“Did you see Happy Gilmore?”

“Yeah, I thought that was great. I laughed nonstop. I enjoyed that movie more than anything I’ve seen in ages.”

“I dragged my son back to Happy Gilmore a second time. He didn’t really want to see it again, but he was nice enough to humor me.”

“All I’m saying about Kazan is that if the award is for his lifetime achievement in filmmaking—films like Streetcar Named Desire, Viva Zapata, On the Waterfront…”

“… Splendor in the Grass. If the award is for artistic merit and not for what he had to do to make those films, then no one deserves it more…”

“… It’s like Pete Rose not being allowed in the Hall of Fame.”

“It’s ridiculous. Not to change the subject, Viggo, but Diane Lane stars with you in A Walk on the Moon, doesn’t she?”

“Yes, she does. You worked with her on Rumblefish, didn’t you?”

“I certainly did. Sexiest woman on the planet.”

“She’s a wonderful actress—brave and honest.”

“Good qualities in an actor as well as a human being.” 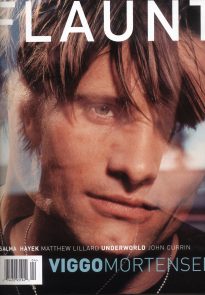 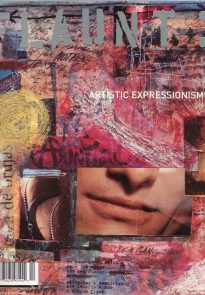 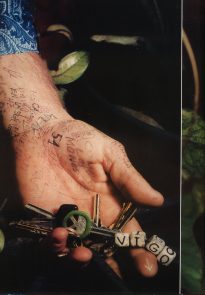 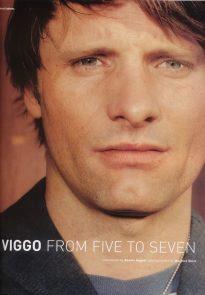 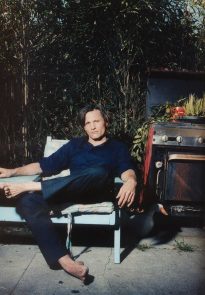 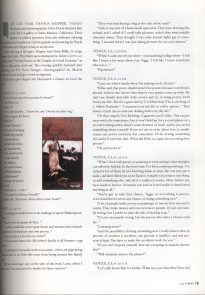 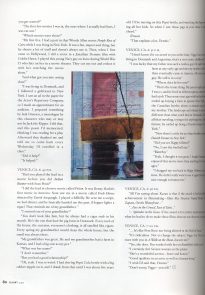