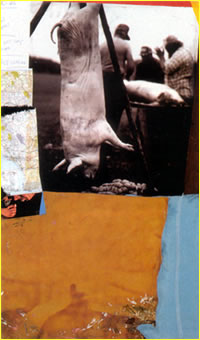 The Viggo Mortensen we already know has appeared in numerous major films, including Crimson Tide, A Perfect Murder (yes, those were his paintings), GI Jane, Portrait of a Lady, Albino Alligator, and Gus Van Sant’s recent remake of Psycho. The Viggo Mortensen we are about to meet has been publishing poetry, as well as making and showing painting and photography, for the past few decades. And now he’s about to make the move to the director’s chair with an innovative self-penned film project. But here’s the secret: it’s all connected.

Mortensen’s photography is decidedly low-tech, utterly spontaneous, and free of preconception, employing no staged lighting or posing. He literally takes pictures of what is right in front of him. But there is a certain saturation to his colors and a mystique to the content which captures the sometimes obscure significance in the ordinary moments pictured. Mortensen’s stills are often as much a question as they are an answer.

It could be that working with a range of independent-thinking directors in film has somehow informed his eye—his way of looking. Spending time in front of a camera and seeing the images transformed through film may have instilled in him a sharper attention to detail and the accidental arrangements of ordinary objects. Or it could be that poetry, his other muse, has taught him to think in verses, passages and juxtapositions. Or it could just be that he has a good camera and an interesting life. Whatever the reason, Mortensen has a gift for making his photographs strange and compelling little vignettes in the grand procession of life.

When we met at Callahan’s—a small greasy spoon perfectly suited to the artist’s genuine unpretentiousness—on a sunny day in Santa Monica, it is obvious that all eyes are fixed on the sandy blond actor as he strolls through the front door. The attention is not so much the result of his cinematic renown—as a chameleon character actor, Mortensen enjoys a comfortable degree of off-screen anonymity—but for his classic, almost poetic good looks. During our conversation, oblivious to the flustered waitress tripping over herself, Mortensen makes obvious his obsession with the ordinary as he breaks to explain, for example, why the green countertop reflecting fluorescent light onto the cherry-red Coke machine in the background would make the perfect picture. “I’d take it right now if I had my camera,” he lamented.

Let’s start by talking about the relationship between your film work and photography. Does your work on one side of the camera affect your work on the other?
Maybe subconsciously. The cinematographers frame scenes, the directors frame scenes—ordinary scenes, action scenes. I haven’t consciously studied that, but it might affect what I’m doing. I don’t usually take photos when I’m doing a movie, but I have. There are a couple of images [taken during the shooting of] a movie called The Passion of Darkly Noon. I thought the images were interesting, some stuff with an elephant, a girl [Ashley Judd on the drive home from a night shoot] with blood all over face, in her bathrobe, smiling and taking pictures of the sunrise.

When you do take pictures on set, it’s not really documentation of the circumstances, but just where you find an image?
It’s what’s available. You know, I’m not a hugely social person. I don’t really go out (smiles). So, when I’m in a situation like that, where I’m working with people, they’re available–if they don’t run away.

So you don’t stalk the crowds at the mall for characters?
I’m sure I could be a lot more efficient and productive than I am, but there’s enough stuff just there. I don’t like to arrange. There are a lot of photographs of people that I’ve seen where it’s obviously a very staged scene—something really choreographed, designed, lit in a certain way. I don’t know if it’s just laziness or preference, but I like to shoot just with available light. Sometimes I’ll use a flash or something, but I like to use what’s there, whether it’s night or day. Just what’s happening—what I see, without interfering. I mean, things are weird enough, and people do strange enough things, that I don’t think you have to try.

You have made the point that your involvement with technology in photography is very limited. How much do you manipulate the images, in the darkroom or on computer for example?

Some images are altered, using double exposures and scratched negatives, or layering images in Photoshop.

So you’re not against technology….

No, I’m just not that comfortable with it. My reticence, or low-level paranoia, is not based in any firm idealogical opposition to it. I don’t like the distraction, so I’m wary.

What are your plans for directing?

I’ve written some things, one in particular that I’m going to do next summer in Denmark. The film is a little bit odd, so it’s kind of hard to finance, even in Europe. But I’ve finally got the Danish Film Institute to put up some money for it, and Lars Von Trier’s company Zentropa [Breaking the Waves] is interested so I might do that. The story is a recurring dream I had when I was eight, then again at seventeen and again at twenty-one. By then I was writing short stories so I decided to write it down. Eventually, the dream became this story. Then I lost the manuscript until I found it a few years ago in an old box and decided to keep it and make it into a screenplay. It’s a silent film, no subtitles or anything.

I wonder if the way you dream is related to the way you take pictures? We’ve talked about that certain indefinable importance, even solemnity, that many of your photographs have. Often, they seem to transcend their subjects.

There’s a story behind them. You know, a lot of times I’ll come across people and places I recognize from my dreams. It makes me wonder.

How has your Hollywood career affected your art career?

Well, I started doing readings and was relatively established as a poet before I really even started with the acting. In the end it’s helped me, that sort of cross-pollinating—it’s inevitable. There might be things that don’t deserve to get hyped at the time, but the shit that’s worthwhile will stand up and last. Years from now, people will forget the rest. It’s a lot easier to be critical and negative and to promote divisiveness, whether it’s in the movies, art, or just social relations, than it is to try to be open-minded and collaborative. It’s easier to just say, “There isn’t room for everyone, and my shit’s good, and my friend’s shit is pretty good—not as good as mine—and all those other people suck.” That’s easier, and it gets you more press, and if you’re clever about the way you say it, you can get a lot of attention with that attitude. It’s funny, like reading the Enquirer, but I don’t want to read that all day long; do you?

Scanned images from the House of Telcontar archives. Yes, they are tiny but remember they were first posted almost 20 years ago when screen size and bandwidth were nothing like they are today.

Notes: From the House of Telcontar archives. Also in the Viggo Chronicles archives. Juxtapoz #19 is no longer available from the publisher.