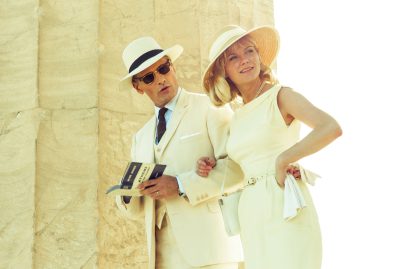 Few writers know how to destroy a European holiday as exquisitely as Patricia Highsmith. It begins with languid sight-seeing, wine-laced flirtations, girls in sundresses and tanned men abruptly tipping back espressos. Yet, soon there is the sense of something spoiling below the surface, and a rot that gently spreads outwards in the heat.

The film adaptation of Highsmith’s with the most enviable summer scenery was The Talented Mr Ripley (1999), in which Matt Damon revealed his talent for disturbance as Tom Ripley, a young man eerily covetous of his friend’s more glamorous life.

Her most recent adaptation, The Two Faces of January, doesn’t unfold with quite the same creepy subtlety, but it still carries enough barbed ambiguities to hook us. It is 1962 in Athens, and a strong-jawed wealthy American, Chester MacFarland (Viggo Mortensen), and his blonde wife, Colette (Kirsten Dunst), are marvelling at the Acropolis.

They are watched by a plausibly charming tour guide, Rydal (Oscar Isaac), who thinks he might be able to wring a bit of cash out of them. Before long they’re snared and whisked on a tour of street markets and restaurants (while Rydal, an American who speaks fluent Greek, skims his commission from each transaction).

Rydal is a handsome drifter, a small-time hustler, with the hint of an unhappy background: he has not returned home for the funeral of his father. Chester – attentively possessive of his wife – seems solid, square, with a war record and a fat wallet. We brace ourselves for the fleecing of this pair of innocent swells. It is, of course, not so simple.

The performances are wonderful: Mortensen, as a man maintaining a battered façade of respectability, even as he disintegrates in alcohol and jealousy; Dunst, as a wearying sex-bomb looking for a way out; and Isaac (Inside Llewyn Davis), whose quality of watchfulness sets him apart from other young actors.

At times – such as in the dangerous mutual attraction between Rydal and Colette – Isaac’s performance could have done with less control and more sense of a helpless sliding into passion. But in the unspoken fencing with Mortensen’s character, it serves him very well indeed.

As circumstance locks the trio together, the atmosphere becomes a darker echo of those holiday jaunts on which three’s a crowd, and unspoken irritations are chafing in the heat.

This is the first feature film both penned and directed by Hossein Amini (the writer of Nicholas Winding Refn’s Drive) and he skillfully carries the audience with him all the way.