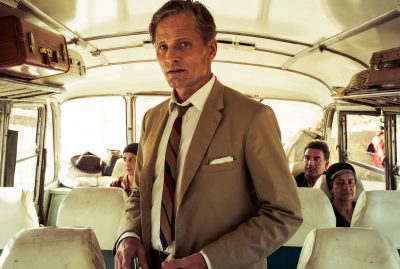 Viggo Mortensen talks about playing Chester MacFarland in The Two Faces of January and why the script and the subtle nature of it provided something a little bit different from the normal thriller.

He also talks about his career post-Lord of the Rings and why he goes about choosing his roles in the way that he does. He was speaking at a UK press conference.

Q. This is such an intense psychological drama, did you and your co-stars talk through it much. Or did you just dive in?
Viggo Mortensen: Hoss[ein Amini, writer-director] got all of us together, maybe a month or five weeks… it was almost a month and a half before we started shooting here in London so that we could talk about things such as the three different relationships, how far he wanted to go with each one, and what initial ideas he had. And we felt more comfortable because we could ask questions or say if we weren’t so comfortable with something. Out of those discussions he thought a lot and changed certain things, so by the time we started shooting it was a lot easier than if we had just shown up and tried to wing it. I think it’s one of those movies that’s rare these days in that it’s quite subtle. And because it’s subtle and if you’re the type of person that’s seen lots of movies you can miss little things because… it’s like a classic thriller and noir movie.

A lot of the behaviour and actions are really subtle. Just the tone of the film, the music…. what’s great about it is that when you see it a second time you see even more things about the characters and the complexity of their relationships. Most movies don’t work out that way. With most movies, you see them a second time and say: “Oh, it wasn’t as good as I thought.” And you start to see flaws. Here, it’s the opposite. It’s a delicate thing. So, for me, it was really good to be able to talk through as much as possible before we started because it looks like a relatively big budget movie and a rich looking movie but we didn’t have lots of money compared to other movies that look this way, or even time to shoot. We were moving around a lot. So, it was good to have a lot of time beforehand to prepare.

There aren’t too many directors that are so open about their scripts, either, especially first-timers. I mean, he’d been writing it for so many years and fine tuning it all along, and all of a sudden things change as you’re shooting. But if you’re smart, like Hoss is, you’re open to changing things. And many times it would be his idea. We’d be shooting and he’d go: “You know, it’s nicely written that part, if I say so myself [laughs]. No, he’d say, ‘maybe it’s nice on the page, but I think you guys… the scene works better without that bit’.” Most writer-directors are pretty defensive about their words. But that was really smart and it was really helpful to us because it was better to do it then than to do it later and have it happen in the editing, when it doesn’t work somehow. But he was really smart and humble about his script.

Q. Is it rare to find a script like this that’s not based on a biopic or something real life?
Viggo Mortensen: And also knowing that we were going to get to these places. With technology nowadays, you can shoot and make it look like you were in these places. But to actually be there, it felt like an old fashioned movie-making experience, even though we were shooting with modern techniques and digital. But the way it was shot, from the lenses to the camera positions, to the approach to the costumes, and Hoss’s sensibility… it feels like you’re watching one of those great old movies. One of the really subtle things is the look of the movie. There are other movies from this period, you could even say it to some degree about The Talented Mr Ripley, or I could as I’m speaking for myself here, but I see that movie and say ‘it’s great, it has really good performances’ but there’s a real concerted effort where you feel, a lot of the time, that this is the year, and this is the look, these are the tourist spots. And from the first part of our movie, when we’re up on The Acropolis, you feel it’s going to be like that too. But it quickly changes and you’re in places you don’t know. It becomes more murky and messy but it’s always true to the period without calling attention to it. It’s not a bunch of postcards saying ‘look at this’. They wear incredible clothes at the beginning, everything is perfect, but then you just enter the story and that’s very subtle. And yet it looks like a movie that’s every bit as expensive when, in fact, it was probably three or four times less expensive than a movie like The Talented Mr Ripley.

Q. You seem to choose personable characters. After The Lord of the Rings, were you inundated with blockbuster scripts? And was it a conscious choice to opt for more independent films?
Viggo Mortensen: It’s not a conscious thing. I’m just trying to do good stories. You don’t find stories that are really good that often. I think the idea is that you want to be in movies that you feel good about seeing later, whether it’s next year or 10 years from now. Sometimes you make a choice, and there’s nothing wrong with it… there’s that old piece of advice in terms of the movie business that goes: “Do one of those big ones and then do one or two smaller ones.” And no matter how the movie turns out, if you do it right, it’s a long process to prepare it and to shoot it and then do what we’re doing now [press], so given that it’s the same amount of work, you might as well do something that you can go out and speak positively about rather than thinking “what am I going to say nice about it, because I really don’t care for it”. I really don’t like doing that.

So, for me, I realise there’s a risk to going off and doing movies in Arabic or movies that may not even be released in North America. There’s a risk that if you do too many of those then maybe you’re not even going to be asked to do the bigger movies [laughs]. But I’m not worried about it and I would have nothing against doing another big one if it was a really good story and somebody wants to ask me. A lot of times, people ask why I choose this or that. In reality, even if you become really well known as an actor, you really only have the power to say ‘no’. If you say ‘yes’, they have to want you, and it doesn’t matter how famous you are. And sometimes being well known, or people having a certain idea about you, can go against you. You may read a script and approach something because you really like it, but they might tell you they don’t see you that way and then you have to fight against that. So, you can say ‘no’ but saying ‘yes’ is a privilege that you have to be handed. It’s not just there.

Q. Is it true that you were going to be cast in Man of Steel?
Viggo Mortensen: I was offered two different parts in that but I couldn’t do it. It would be fun to do something like that.

Notes: The article also links to their review of the film, and to their interviews with Hossein Amini, Kirsten Dunst, and Oscar Isaac.