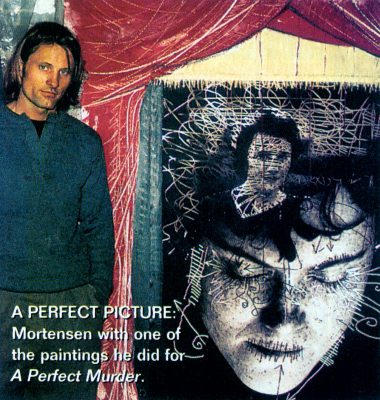 In an era when young actors are hyped to the moon after making a film or two, only to be ungraciously spat out at the first misstep, it’s refreshing to see the late-blooming of 39-year-old Viggo Mortensen. After making his debut as Alexander Godunov’s younger brother in Witness, Mortensen worked in lots of movies, but the ones with titles you’d remember didn’t feature him in any way that made him stand out. It wasn’t until he starred opposite Nicole Kidman as a sexy suitor in The Portrait of a Lady that audiences took notice of him, so of course they mistook him for a newcomer. Hollywood heavies perked up their ears. Demi Moore cast him as a magnetic, poetry-reading-but-over-the-edge Navy SEALs trainer in G.I. Jane. Now on screens as the artist with a half-amorous/half-homicidal relationship with Gyneth Paltrow in A Perfect Murder, Mortensen is hotter than he’s ever been, and he’s already signed on for his next project, Gus Van Sant’s high-profile remake of Psycho.

Dennis Hensley: Would your career have moved along faster if you had played up your looks earlier?
Viggo Mortensen: I tried out for a lot of parts where looks were necessary and I didn’t get them. I’ve probably done two dozen on-camera tests for those roles and I’ve never gotten anything that way. It’s scary to think of all my audition tapes out there somewhere.

Q: Any tapes you wouldn’t mind seeing?
A: One. The test for the part that Patrick Swayze got in To Wong Foo, Thanks for Everything, Julie Newmar.

Q: What was your drag queen outfit like?
A: I think it was Chanel, like a Jackie O. thing with Ann-Margret hair. Before the audition, I wanted to practice a little so I called up a friend of mine, [actress] Valeria Golino, and she helped me to get all dressed up. Then I walked on Broadway in New York in the middle of the day. Nobody even blinked, and some guys whistled.

Q: How did the screen test go?
A: I asked if I could sing “When I Fall in Love” a cappella, figuring if I could make that much of an ass of myself I’d be less embarrassed saying the dialogue.

Q: Let’s talk about A Perfect Murder. What was Gyneth Paltrow like?
A: She’s very self-possessed and has a really rare gift—she seems to know exactly what she wants to do and how she wants to present herself.

Q: What surprised you about your other costar, Michael Douglas?
A: Just before Christmas, Michael was singing Christmas songs all day long, but he’d change the lyrics and he’d make the crew sing along, too. It was just goofy. You don’t think of him as being that kind of a dorky guy.

Q: What was your biggest challenge on that film?
A: I played a painter and I needed to have all this artwork around me, so I asked if I could do some paintings myself. I just went crazy. I couldn’t sleep. I did about 45 paintings in two weeks.

Q: You played a hard-ass in G.I. Jane. Was that fun?
A: Bossing people around? At first it was a little embarrassing but once I got into it, it was all right. I’m not an “Everybody listen up!” kind of guy.

Q: The fight scene between you and Demi Moore looked pretty brutal.
A: It was actually fun because she was really into it. But I was a little afraid—she kept getting closer and closer when she was kicking me in the balls. She actually hit me a couple of times.

Q: What’s the biggest misconception about her?
A: People think she’s just this hard business woman. She is good at business, but she’s also shy and, in a lot of ways, soft.

Q: Were you there the day she shaved her head?
A: Yeah, I went by to look. The crew spent the whole fucking day doing that scene. It was like an event—people brought their video cameras.

Q: Your first movie was Witness. What do you remember about costar Harrison Ford?
A: He was really into the building-the-barn scene. I was supposed to be handing him tools and he’d say. “Hand me a whatever,” and I didn’t know what the hell he was talking about. He probably built most of that barn himself.

Q: How were people expected to believe The Portrait of a Lady when Nicole Kidman passes you up in favor of John Malkovich?
A: In the end, maybe she did go for me—it’s not explained. Nicole did a great job, but nobody seemed to care about her work in that.

Q: Didn’t you live in South America for about nine years as a kid?
A: Yeah, I was 11 when we moved back to the States. I couldn’t believe the swear words, the slang, the music—all the kids were into Blue Oyster Cult and Grand Funk Railroad. I was a closet Carpenters fan. I’d sing “Top of the World” to myself on the way to school, but when I got close to campus I’d shut up.

Q: Have you ever made a fool of yourself when you’ve been in love?
A: Oh, I’ve made an ass of myself but it’s worth it. When you’re younger, you just take it for granted that every once in a while you’ll fall in love. As I get older I find it takes a lot for me to feel that, which is kind of too bad.

Q: Do you ever write love poems to the person you are wooing?
A: I have done that. [Laughs] I don’t think I’ll do it again. It scares people. They think you’re insane.

Q: Actors who also write poetry seem to catch a lot of ribbing.
A: It’s expected because the poetry is usually not done well. But you got to do what you want to do. I had a book of poems called Ten Last Night published before I was at all known as an actor, so it stood on its own.

Q: What’s something you’re good at that would surprise people?
A: Changing diapers.

Q: When your son was younger, did he ever have trouble separating the real you from the screen you?
A: Not really. When he was about four, he was on the set of this movie and watched a stunt where I had to dive over these boxes as bullets just missed me. When I looked over at him he seemed so serious I thought maybe he was worried I was really being shot at. After the third take I walked over to him and said, “You OK? What do you think?” He held up three fingers. I went, “The third take?” He said, “Yeah, that was the only one I believed.”

Q: Was he right?
A: [Laughs] Right after that the director goes, “Just print three, that was the only good one.”

Q: You recently finished shooting The Blouse Man with Diane Lane. What’s it about?
A: It’s set in the summer of ’69 and is about a Jewish family who goes to their summer bungalow in the Catskills. I play a guy who lives in that area and upsets the family.

Q: Have you ever been shocked at seeing your image somewhere?
A: The other day I came across a MAD Magazine. For the first time I felt I had arrived when it I saw a G.I. Jane parody of me called “G.I. Shame.” [Laughs] My favorite part was the idea that the candidates were dropping out of the SEALs not from the physical abuse but from my awful poetry readings. 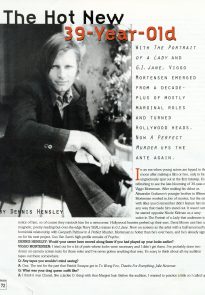 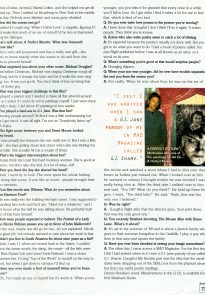 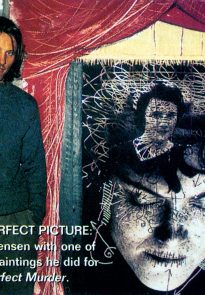 Notes: Movieline magazine has been reincarnated as a YouTube channel. Photographs are by Paula Symonds (p 72) and Lindsey Brice (p 73). Scans by Brego.net. Thanks to House of Telcontar and viggo-online.net (defunct websites) for archiving the text of this article so I didn’t have to type it in.