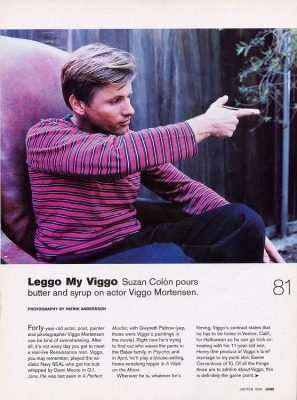 Forty-year-old actor, poet, painter and photographer Viggo Mortensen can be kind of overwhelming. After all, it’s not every day you get to meet a real-live Renaissance man. Viggo, you may remember, played the sadistic Navy SEAL who got his butt whipped by Demi Moore in G.I. Jane. He was last seen in A Perfect Murder, with Gwyneth Paltrow (yep, those were Viggo’s paintings in the movie). Right now he’s trying to find out who wears the pants in the Bates family, in Psycho; and in April, he’ll play a blouse-selling, home-wrecking hippie in A Walk on the Moon.

Wherever he is, whatever he’s filming, Viggo’s contract states that he has to be home in Venice, Calif., for Halloween so he can go trick-or-treating with his 11-year-old son, Henry (the product of Viggo’s brief marriage to my punk idol, Exene Cervenka of X). Of all things there are to admire about Viggo, this is definitely the game point.

I read somewhere that you had the best walk. What’s that about?

Really? (Laughs) I don’t know. How do they know?

I guess people are standing behind you.

Yeah…watching me walk. What’s a good walk? I stay in a pretty straight line I think.

That’s a good thing to aim for. You’ve done around 30 films, and people still think you’re a new face. Is that good or bad?

That’s kind of a double-edged sword. In terms of people not being tired of you, it’s a good thing. In terms of people saying you have yet to prove yourself, or being forced to do two movies a year away from home, that can be a lot if you have a life outside of that—whether it’s family or other interests.

And you sure have a lot of them. You were born in Manhattan, yes?

Yeah, but we moved all over the place—Venezuela, Argentina, Denmark. I still have a taste for it, traveling. And I am good at making myself at home quickly wherever I am. I don’t know if I’m as good at, like, going into a social gathering and starting to talk, but I could spend days by myself.

When did you start painting, poetry and photography?

Somewhere along the way. According to my mother, I never was anywhere without a pencil, drawing. She recently gave me a notebook filled with my old drawings, and there’s one from when I was 7 that was wild. All the others were pretty regular, like swords, guns, planes crashing, pee-pees… And then there was this school assignment. At the top of the page, it said: “Little Red Riding Hood.” It was a real painting—the colors were blended, and it was kind of abstract, but I really liked it. Anyway, written over the drawing in red pen was VERY POOR! Underlined. Teachers used to do that, thinking it was constructive.

Ouch. But you showed her, because you just had your first gallery showing. Is it hard putting a price on your art?

There’s a woman at the gallery who helped me with it. When it’s just you, you may be having a bad day and look at something you made, and go, “God!” But someone else will see something different. A couple days ago, I looked at all the paintings, and I was like, “I don’t know what these are.” Then it snowballed. “What kind of actor am I anyway? What kind of father? I mean what a joke. God, I’m such a vain, self-involved creature, and I should just stop making these things and inflicting them on people!” I can see why people jump out of windows.

Wow. Is this a good time to ask how you feel about being called a Renaissance man?

I haven’t been called that. I have been asked how I find time to do all this stuff.

Let me guess: no TV-watching?

That’s right. My son gets annoyed because there are cartoons that he feels are a matter of life and death. But he sees some of that stuff at his friends’ houses, and we rent a lot of movies. I think later on he’ll be happy about it. And he reads a lot—at least he’s using his imagination rather than just sitting passively. But Henry’s always been able to spend hours entertaining himself. He’s great. You could be in the same room with him, but he’s totally in his own world… I don’t know what I’d do without him.

Photographs by Patrik Andersson. Scans by sachie, collected from her sadly defunct website. 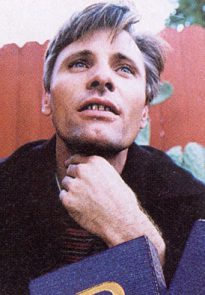 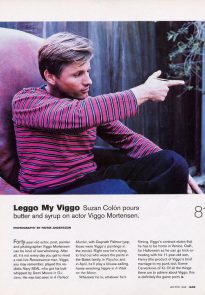 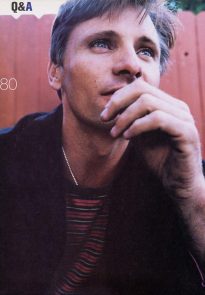 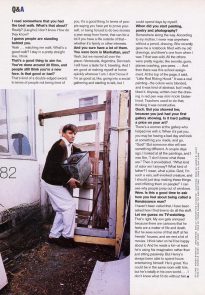 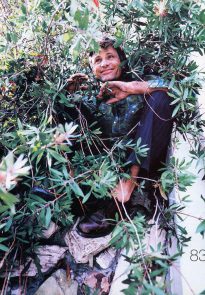 Notes: Photographs by Patrik Andersson. From the House of Telcontar archives. To inquire about the availability of the January/February 1999 issue of Jane, contact the publisher at jane@neodata.com or by telephone at 800-753-7276.