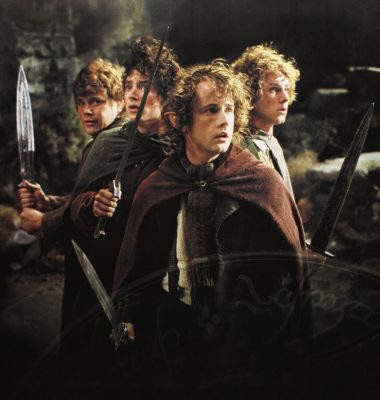 Being three-foot-six tall, with pointy ears and hairy feet, may not seem like an enviable job. Especially when it involves being in New Zealand, away from family and friends, for 15 months. Plus 12 to 14 hour days, often in remote locations, with new physical skills to learn and scenes that had to be repeated twice because of the problems of scale.

But the enthusiasm that bubbled up from the four actors when they spoke about their experiences was scarcely containable. Elijah Wood (Frodo Baggins), Sean Astin (Sam), Billy Boyd (Pippin), and Dominic Monaghan (Merry), interrupted one another, topped each other’s stories, laughed at one another’s jokes and, most of all, heaped praise upon the man with the singular vision to pull it all off: Peter Jackson. Indeed, Elijah Wood was so keen to play Frodo, bearer of the Ring, that he couldn’t wait for the director—who had been seeing a lot of British actors for the part—to start in Los Angeles. Instead, he persuaded some friends to film his own audition, then sent the videotape to the man himself.

“They wanted to put me on tape in a casting office,” explained Wood, “but I thought that would be a bit sterile. I wanted to convey my real passion for this role, and for the film, in my own kind of way. So I found a costume, learned a few passages from the book by heart, went out into the woods near my house, and got my friends to film different scenes from all sorts of different angles.”

I wanted to convey my passion for the role in my own way.Elijah Wood

It was a risky strategy, especially given that Frodo, far from being a squeaky-clean Luke Skywalker-type, is an extremely complex character, both morally and psychologically. But Elijah Wood was alive to those dangers, and made sure he included the full spectrum of Frodo’s personality: “The scenes kind of ran the gamut. There was something from Hobbiton, when Frodo meets Gandalf for the first time in the beginning. And something from the end, when he’s all that’s left, and all that he can see is the Ring. So basically it was Frodo all sort of innocent and lovely, and then completely gone at the end.” This was part of what appealed to Wood, the sense that his character would develop over the three movies, and would be a very different Hobbit at the end. “Frodo runs this amazing arc, in which he goes from being this innocent, curious adventurer at the beginning to being a very flawed and conflicted character. And the challenge of creating that arc was intriguing to me.”

Being of tender years, the actors were not of the generation that read Tolkien’s book as a matter-of-course, but their parents sometimes were. Dominic Monaghan’s father, a die-hard fan, bought him The Hobbit for his thirteenth birthday, and The Lord of the Rings the following Christmas. Even so, he found it hard to immerse himself in the all-enveloping world of Middle-earth. It was something he only managed later, while traveling back and forth on the train to London for auditions. Sean Astin admitted he’d only tried to read the book once he’d been asked to audition for the part of Sam, and even then somewhat selfishly, to see which scenes featured his character. Billy Boyd, was another one who didn’t read the book properly until he knew he had the part. And, like Astin, his perspective was skewed by knowing that he was to play Pippin.

What hooked Elijah Wood, who had never attempted to read the trilogy, was reading the script. “It just took me into another world. It freaked me out. I remember driving home after reading it and I was expecting Orcs and things to be following me.” Something similar happened during filming, when Elijah Wood was shooting a scene with Sir Ian McKellen, who plays Gandalf. “It was just a pick-up of a scene, but suddenly I thought, ‘Oh my God, I’m listening to Gandalf and he’s telling me about the history of the Ring.’ And I’ve never done that before. But there were many moments like that in the film, because everything was portrayed in such a realistic way. Every actor became their character.”

The final word on the experience of playing Hobbits, however, goes to Dominic Monaghan:

“Hobbits have a real innocence. They love wholesome things and they enjoy good food, good living and great company. They are people who embrace life. All four of us were like Hobbits at the start of the process, we’re probably more so now.”

Tagged: characters, Fellowship of the Ring, hobbits, interview, Lord of the Rings

Notes: Part of “SFX Covers All Things LOTR” in the SFX Fantasy Special 2001.