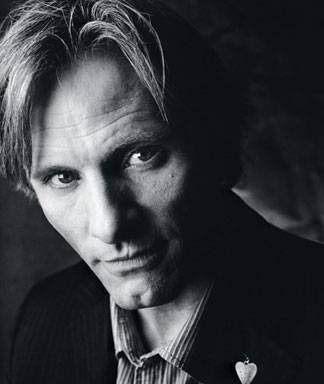 I’ve been thinking about it a lot today because my first thing when I realized I was dreaming this, I thought that it was wrong. Right? It would be like having sex with a sheep or a dog. And then I was….” Mortensen leans back into the banquette pillows and stares up at the star-flooded L.A. sky, looking oddly lovesick. “She was very hairy all over, but she was really nice and really sexy and really affectionate and really present, and it wasn’t like….” His voice trails off. “But there were moments in the dream—she was very physically strong. And I was worried that, you know, the biting, it was scary. And also, it was a lot of sex.” He is incorrigible. “She just kept wanting to have sex. She’d be looking around.” The actor, who is sitting in the garden café of the Sunset Marquis, apes distraction, “and all of a sudden she’d be like, whoosh!” He jumps. “And I was like, `You’ve got a one-track mind!’ ” He laughs at this, pounding the table.
“And after a while I thought, It’s not wrong! It’s not wrong! I mean, we’re not that different!” He laughs and laughs.

This was not how things began. Several ate-afternoon hours earlier in the hotel’s nearly empty dining area, Mortensen is sitting at the piano, leaning close to the ivory keys, playing soft, sad, jazzy notes. His dark blond hair falls across his face, but the square, cleft jaw is recognizable, as are the thick-knuckled hands that famously know their way around a sword (The Lord of the Rings), a gun (A History of Violence), a knife (Eastern Promises), and a woman (A Walk on the Moon). He has not come empty-handed. Mortensen presents you with a big box of exquisitely produced, beautifully bound books of poetry, painting, photography, and fiction— many by him, some by others, all published by Perceval Press, his indie
publishing company. “The last few days have been pretty intense because I’ve had to finish a few,” he says, rubbing his pale, hazel eyes. “Seriously, except for two hours of sleep, I’ve been on a 72-hour jag.”

Mortensen settles into a booth, his feet pigeon-toed, looking far south of his 50 years, in jeans and a long-sleeved charcoal and black striped fine-knit cashmere pullover. He has an athlete’s body, sinewy and fat-free, suggesting an agile power. For his long-awaited film The Road, based on Cormac McCarthy’s Pulitzer-winning novel, the actor slimmed down to play a father (simply called The Man) taking his son on a harrowing journey of survival in a post-apocalyptic world where the sky is ever lead gray and cannibals roam. It might not be fun for the whole family, but it’s certainly the antidote to treacly holiday fare: It’s Not a Wonderful Life.

“Even if you haven’t read the book, you have the gut feeling that it’s probably not going to end well,” Mortensen says. “It was an interesting story to explore: The idea of a parent being concerned about his child’s welfare and safety is universal. You wonder what’s going to happen if you’re not around. Will they have food, are they going to be happy, will they be loved? This takes it to the extreme. The thing that’s beautiful is the child becomes the teacher.” In the end the film is devastatingly hopeful, due largely to the casting of Mortensen, a star free of ego and offscreen baggage who projects intelligence, humanity, strength, and the rarest of attributes— goodness.

“I first got to know him on the phone,” says Charlize Theron, who plays Mortensen’s wife in flashbacks in The Road. “We would have lovely, long conversations. Viggo made such a point of wanting me to know that I was going to be completely supported. He’s definitely a caretaker, which is a really beautiful quality, and a man of many passions—poetry, photography, books…. I arrived on set and there was a library in my trailer.”

At the same time, says Nicole Kidman, “He’s mysterious. He reminds me of Daniel Day-Lewis, who I’m working with now— you know there’s an enormous interior life.” Kidman met Mortensen on Jane Campion’s The Portrait of a Lady in 1996. “He was a little awkward, which was sweet. He has all that humor and bravado, but that gave him a fragility. Viggo’s a Campion man. Her favorite men are Byron-esque.”

Fitting, given his gift for the quiet poetic moment. In The Road Mortensen’s character takes his son to his childhood home, long since abandoned. The living room is covered in a blanket of ash, clouding the family photographs on the mantel, the stopped clock on the wall. A couch faces an old rabbit-eared television. Mortensen lifts a brocade cushion, turns it over to reveal the clean, still colorful side, sits down, and looks around the room. He’s seeing them there, hearing their voices, the sound on the TV. It was an unscripted act that came to Mortensen naturally, evoking what was and will never be again. It’s emotionally akin to the ice-house scene in Dr. Zhivago. “Oh, I remember seeing that with my mom when I was really little,” Mortensen says. “My mom used to take me to the movies after school. I saw some pretty grown-up films with her.”

In a business populated by those whose childhoods were peripatetic, Mortensen’s past is positively exotic. Born on New York City’s Lower East Side to a Danish father and an American mother, he was raised on cattle and chicken ranches in Venezuela and Argentina. When his parents divorced, his mother, Grace, moved her three sons—Viggo Jr., Walter, and Charles—to upstate New York. Viggo was 11 and spoke four languages. “I’m very lucky my parents moved around quite a bit. Travel is one of the best antiwar weapons that there are. I’ve been to Iran, and if you’re there you see little kids, cops, old people, cemeteries. Once you see that, you can’t say, `Oh, Iran, let’s bomb them.’ We’re human, period, end of story. A little kid can tell you that— they’ll play with anybody.” Long pause. “I won’t consider this country civilized until there is universal health care.”

“He has a morality that comes from his heart,” says Maria Bello, his History of Violence costar. “He was one of the first celebrities to protest the war. He drove to Texas to meet Cindy Sheehan. Viggo protested
the war before it even happened.”

Mortensen’s politics are no jolt to anyone with a copy of Skovbo, his book dedicated to Howard Zinn (author of the lefty classic A People’s History of the United States) and Dennis Kucinich (the closest thing to a socialist in the U.S. Senate); or those who watched him promote The Two Towers on Charlie Rose wearing a NO MORE BLOOD FOR OIL T-shirt. If it were up to him, countries wouldn’t exist—we’d live in a big borderless world. “I say all flags, all passports, even sports uniforms—cool as they look—are bullshit,” he declares. But please don’t ask him to surrender the San Lorenzo soccer team patch on his jacket. He reveals it with a boyish smile: “I’ve loved them since childhood.”

In the twilit sky, the sun and the moon are changing shifts. The faint strains of Mendelssohn’s “Wedding March” float across the high hedges from an adjacent garden. Mortensen cocks his head and listens, smiling. He walked the aisle himself in 1987, with Exene Cervenka, one of the lead singers of the L.A. punk band X. Though divorced since 1997, the two are still close and have a son, Henry, 21, whose initial is tattooed inside his father’s wrist. “Henry used to write H’s on my arm, and he wrote that one exactly like that,” Mortensen says affectionately. “The next day I drove to a tattoo parlor and had them go over it.”

He can’t see getting remarried. Then again…”But you’ve got to practice being friends,” he says. “You’ve got to pay attention. How hard is that? You can do it from a seated position!”

No doubt there are women in his life. Real women. Not typical movie-star lures, but 100 percent all-natural, cruelty-free, artistic sorts, whose art might be in the way they pour coffee in a diner on a graveyard shift. You can tell Mortensen sees the beauty in faces and people Hollywood overlooks. Botox users need not apply, but if you’re someone with a past… “Do you find a limp attractive?” he asks out of the blue. Yes, actually. “Yeah, I thought you might. Because there’s a story there.” Has he had one great love in his life? He smiles: “All of them.”

He springs up. “I have to pee! I usually pee outside my house. Nothing nicer than peeing at night, looking at the stars, smoking a cigarette. In a jungle you have to worry about bugs.”

Back from the loo, he flops down again: “Starry night tonight.” Mortensen has a flight to Argentina in the morning, but he’s unconcerned. No wonder he never gets any sleep. And that’s where the monkey business started.

“He can be silly,” says Ed Harris, who worked with Mortensen on A History of Violence and Appaloosa. “Not so much with men. But around women, he’s the silliest.” His Good costar Jodie Whittaker suffered it firsthand. “Everyone says he’s a really sexy guy, but that’s not his everyday way of being. He’s like a teenager—excitable and funny. He starts really laughing, and even if you don’t find it funny, you lose it too, just because he’s laughing! It’s enchanting.”

The check paid, Mortensen offers to carry your books along the garden path. “It’s true, the monkey thing,” he says. Here we go again! “It’s just that it didn’t seem so wrong. But I was thinking, What if I became very attached? I can’t very well say, `Where the hell have you been? What did you do today?’ I mean, there’s no room for jealousy in a relationship with a monkey.” Maybe that’s why it would work. “That’s what I was getting at!” He’s laughing now, and so are you.